2020 Board of Education Organizational Meeting 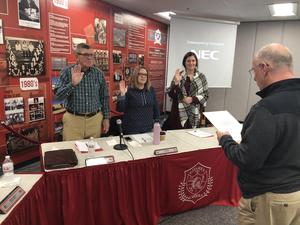 The Goshen Board of Education held its 2020 Organizational Meeting on Thursday, January 9, 2020.  During the meeting district Treasurer, Mr. Todd Shinkle swore three members into office based on the results of the November 2019 election.

Mr. John Benthein was sworn into his 2nd term of office.  Originally elected in 2013. Mrs. Deborah Gray was sworn into her 1st term of office.  Mrs. Gray was appointed in May of 2019 and was elected for the final two years of Mrs. Sue Steele’s seat in November 2019. Mrs. Julie Casey was sworn into her 2nd term. Originally elected in 2016. The board also voted on the following positions for the 2020 calendar year.